Skip to main content
E-Zine
Added on September 22nd, 2017 in Teaching and Learning

This week we have been working on a project about languages, identities, appearances and nationalities. We were asked to write an essay to share our thoughts with the group. This experience was very interesting and thought-provoking. Hence we decided to choose eight paragraphs out of our articles and share them with you. These extracts have different settings but a common thread.

As you may already know, we hardly say “No” because it sounds too direct and impolite in some cases and we use polite verbs to elder people and those who we meet for the first time.
When I met them in Switzerland, it was a hard time for me. Since I couldn’t say “No thanks”, I had to finish a huge dinner, which made me withdraw into the toilet for a long time. What is more, I had no idea how I could show my respect to them in English without using polite verbs, so I always felt bad while I was talking with them.
After a while, I was still struggling with English without polite verbs and euphemisms. However, as I got used to it, I started to say my opinion spontaneously as well as “No”. It was the same when I spoke Japanese. I used to be negatively silent obedient but English has changed it.

“What we express when we are abroad quite often mismatches our intentions. The information we are usually and subconsciously sending to someone else are now on a blurry channel because of a lack of accuracy in the language and the ignorance of local codes”.

“Different parts of the world have different prejudices about Italians. When I went to England and I said that I was Italian, English men asked me about pizza, mafia and Berlusconi. This is what they initially remember about Italy.
On the other hand when I went to Chicago and I said to American men that I  was Italian, they stated that Italy is an outstanding country with the best food in the world. Moreover they ran after me to show me their picture in Rome, Venice and Milan. hahaha
I was surprised about how prejudices are different about Italians in distinct countries”.

“Do we need to generalize in order to help people understand us? Probably, yes. Italy is complex, lively, colorful; and it’s also full of more or less beautiful contradictions. We belong to them, we often silently cherish them, and maybe we’re truly, tolerably self-centered. Watching a foreign movie playing around with Italian stereotypes might be an unenjoyable experience, but underneath the surface a true Italian would just say: “any press is good press, right?”

“Another thing that I had to deal with was when going abroad I tried to avoid answering questions about where I come from cause for some reason people think all the saudis are filthy rich and have an oil barrel with them which was so funny at that time.
As for now, i’ve become more aware of the situation and how horrible it actually is, so I would start explaining to others, and make things crystal clear for them
To be honest I still like the ‘terrorist’  thing unlike other Saudis it doesn’t upset me it just makes me laugh”.

“These days in our modern world there are more and more prejudices. Lots of people connect nationalities with certain stereotypes. I was born and raised in my hometown Zagreb, Croatia. In Croatia we have”special” types of stereotypes depending on which region you live in. Needless to say each region makes fun of each other and imitates the accent of other regions in order to make better jokes”.

“When I was in my late teens I lived in Barcelona. One night I had just returned from visiting my folks in Dublin and my plane was delayed which meant I arrived in the centre of Barcelona in the early hours of the morning. I was walking down Las Ramblas (a pedestrian avenue) when I saw a tall, bearded guy, who looked like Jesus, preaching to a small group of onlookers in Catalan. I was taking Catalan classes so I could understand him. It was a few years after the nuclear disaster in Chernobyl and he was telling his audience that the end of the world was upon us. As I passed them he suddenly pointed at me and shouted ‘…beware, acid rain will fall and your hair will turn red (just like mine) and will stand on end (I had long spikey hair at that time). The crowd turned to look at me, aghast, as if I personified their doomed collective future. I smiled at them and said ‘ No, I’m just Irish’”

In conclusion, we learnt that certain cultural stereotypes and  prejudices about languages and identity  shouldn’t be taken seriously because they don’t define us as people. Indeed, what brings these extracts together is the fact we are all human. No matter where we come from, what language we speak or what we look like, there is more that unites us than divides us. 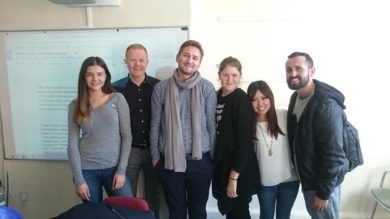