The project has considered 50 different competency frameworks for teachers including the EAQUALS TD Framework, the Cambridge English Teaching Framework, the British Council Continuing Professional Development (CPD) Framework for teachers and The European Profiling Grid as part of their research.

This project is aimed primarily at Teacher-Educators, and they are seen as the ‘first’ if not primary beneficiaries of it:

The envisaged outputs of this project are clearly stated on the ECML website. They include:

1.       The creation of a user guide for existing competency frameworks.

2.       Practical examples of how the existing tools are currently used.

3.       An inventory of key language teaching competences which may include language-related competences relevant to subject teachers.

4.       Further development, piloting and empirical validation of existing tools so as to adapt them for broader use within Europe.

5.       Assessing the need for, and practicality of, a Common European Framework of Reference for Language Teachers.

Alongside these outputs, the stated outcomes of the project include:

1.       Better quality language education which meets the needs of all learners as a result of improved initial and in-service language teacher education, and autonomous professional development for language teachers and teachers of all subjects.

2.       Greater international transparency and coherence in language teacher education that takes into account the diversity of educational contexts across member states.

3.       A deeper understanding and broader awareness of the role all teachers play in developing the linguistic repertoire of their learners.

4.       Improved collaboration among teachers working with or through different languages in order to promote and support plurilingualism.

5.       Dialogue and greater agreement on the key role that language teachers play in education[2]

From 2016 to 2018, a huge amount of work has been done on the project and a framework has been created which lays out the basic tenants and focus of a potential Common European Framework of Reference for Language Teachers (CEFRLT). The process has included:

1.       An analysis and evaluation of the current frameworks in existence

2.       Case studies of how some of the instruments are used in practice

3.       The piloting and further development of selected instruments

4.       An enquiry into the relevant key competencies and attributes for teachers

5.       A feasibility study for a potential CEFRLT

On October 3rd and 4th 2018 at the ECML in Graz, a workshop was held at which the project was presented in its current form and feedback on certain areas and the direction of the project was solicited. 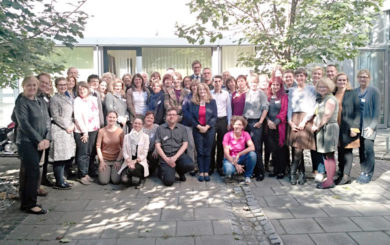 b.       Who should this Framework be written for?

c.       What key areas should the framework focus on?

e.       Should this framework be for Language Teachers or should there be wider remit?

f.        Is the wording used in some of the competencies appropriate?

g.       Which wording or formatting would make a more appropriate ‘House Style’?

On the ECML website they cite two particular outcomes for the participants in the workshop, namely:

a.       First-hand documentation/ information on the user guide to teacher competence instruments with practice examples and a draft inventory for language teacher competences, ready for use and discussion in the participants’ own professional contexts.

b.       Knowledge of and opportunity to influence plans for a possible future Common European Framework for language teachers and for the role of language in education, and to share views on the future of the profession[3]

The structure of the workshop took the form of one day of mostly input sessions designed to familiarise ourselves with the key motivations behind the project, the areas of focus for the project, and some of the areas in which feedback would be welcomed.

The second day of the project afforded the participants the opportunity to investigate the areas of competency being covered by the project, work in groups, and discuss and give more concrete feedback on particular aspects of interest.

During these breakout sessions, participants were given the opportunity to view the ‘Dimensions’ (Categories of competence) and some of the descriptors themselves which have been created by the project team.

a.       For example ‘Principles related to cooperation with other stakeholders and institutions’

a.       For example ‘Cooperating with other teachers, staff members and stakeholders’

a.       For example ‘Development of one’s pedagogic competences’

The contents of these Dimensions was analysed by different groups in the workshop and comprehensive presentations and debates were conducted on each one.

There were a number of crucial areas under debate throughout the 2 days.

The didn’t seem to be a clear consensus within the project team as to who was the intended audience for the descriptors. This carried forward into the workshop with some attendees insisting it should be written for teachers in order to ensure that they have agency in their own development, and others insisting that this type of document should be aimed at teacher educators. There was no definitive conclusion to this debate but it was certainly a valuable one to have.

Concern was expressed regarding the differences between the intentions behind the creation of such a document as a CEFRLT and the practical implications for teachers on the ground. While this documents is being created with the best of intentions, there is a fear, and it was discussed several times throughout the workshop, that a set of descriptors such as this will be used as a series of requirements for teachers, rather than an inventory of guideline descriptors.

There was a lot of discussion surrounding the notion that this framework should attempt to include all teachers rather than simply language teachers. While it was agreed that this was indeed a noble end, it should not be the remit of this particular project, and certainly the consultation process should move far beyond its current state if that remit is to be attempted.

There were whole areas of each dimension which participants in the workshop agreed were either inappropriate, misplaced, or in need or revision. These included a focus on ‘Wellbeing’ in Dimension 5, ‘Interacting with Parents’ in Dimension 4, and ‘Subject matter competence’ in Dimension 2.